Every November 11 on Veterans Day, we celebrate those who have served our country for their patriotism, love of country, and willingness to serve and sacrifice for the common good. At Mount Evans Home Health Care & Hospice, our clinical care team has received veteran-centric education as part of We Honor Veterans, a program of the National Hospice and Palliative Care Organization in collaboration with the Department of Veterans Affairs focused on “respectful inquiry, compassionate listening and grateful acknowledgment.” This Veterans Day, We Honor Captain Chester Peek, a 101-year-old World War II Veteran, engineer, author, and antique airplane restorer.

Chet was born in 1920 on a farm originally homesteaded by his grandfather in northwest Iowa. He graduated from high school at 16 and had to wait until he was 17 to start college at Iowa State College (now Iowa State University) where he began studying Mechanical Engineering in 1937. While in school, he met Marian Swain who would become his wife of 74 years. As seniors in college they were planning for their future together after graduation, but on December 7, 1941 when the Japanese bombed Pearl Harbor, he remembers calling Marian right after lunch and saying ‘All bets are off.’ He explained, “We didn’t know what would happen, just that I would be gone. I knew I would be going to war one way or another, and so I enlisted in the United States Army Air Corps (now the Air Force).

Chet added “I already had a commercial flying license, but I wasn’t particularly interested in just piloting. I had an engineering degree and enlisted as an engineering officer. We were in charge of maintenance of the aircraft.” He had taken part in the civilian pilot training in college and had trained up to a commercial pilot license. He graduated with an Engineering degree from Iowa State in June 1942 and began his basic training as a cadet the same month. Six weeks later in July 1942, he and Marian were married and wouldn’t see each other again for three years.

By May 1943, he was on the luxury-liner the Queen Elizabeth headed for England. “We took only five days to get across the Atlantic. No escort, just out in the open seas with open throttles and never closed them,” recalled Chet. He was a member of the 95th Bomb group, 412 Squadron, and his unit was the second group to arrive in England. They were based on the east coast of England at Horham Airfield, Station 119 about 100 miles northeast of Dover.

At first they had some troops that had fought in World War I, who were well trained with combat experience, but all the young guys hadn’t seen any combat, even though they were well trained. “The first three months were kind of gruesome,” he recalled, “We only had nine groups over there, no training in what tactics to use, no one had been in combat much, and no fighters for protection.” To motivate the flight crews, there were told that once you flew 25 missions you could go home, but few did. “To help understand how rather difficult this was we had 40 complete crews of 10 men each go over with us and only four of those 40 crews completed 25 missions, so your chances were a little slim,” explained Chet. In the first few months sometimes only half the planes they sent out would come back, and they had a 90% loss rate. But by October/November 1943 they had improved formations and effective fighter support and their attrition rate improved. Initially when they went over there were only nine planes in each squadron, but their numbers increased from nine to 18. “It was a sensible thing to do because if a plane was shot down, you don’t have to fix it, so we got along well maintaining 18 planes,” Chet added.

Chet became a Captain at age 22 and was the Engineering Officer responsible for maintaining his squadron’s B-17s. Chet remarked, “I had it about as good as you could get because I had a responsible job that was interesting and the Air Force technical end was a good outfit to be in, they were trained very well.” 110 men were under his supervision including crew chiefs and mechanics. His base, and in particular his facility, was somewhat far from headquarters, “because we were remote and if you halfway did you job they’d leave you alone,” explained Chet.

It was his responsibility to get the planes repaired, loaded with bombs, and ready for the next bombing raid. He can remember being up at 2 and 3 am getting the planes ready and then would grab a few hours sleep on a cot in his office once the planes went on their dawn raids at 5 am. The Americans would bomb during the day, and the British would bomb at night. At first they bombed mostly over France and then Belgium and Holland, and lastly over Germany. “We were able to damage German industry and military capacity, so that they were in bad shape,” noted Chet, “The plan all along was to bomb Germany out of the war.” The 95th Bomb Group’s role was to bomb fuel and manufacturing facilities and to cripple the German Air Force, especially the fighters. When D-Day came on June 6, 1944, they had almost no German fighter interference.

Chet rode along on combat missions in January and March 1944. On one of the missions the seat he was sitting in was hit by German flak. At first he thought he’d been hit, but then realized that only his cushion had. So fortunately he came home uninjured and with a piece of flak as a souvenir. He also remarked that “the German’s never made an attempt to bomb our facilities, and I never knew why.”

His younger brother was also a pilot and was training to fly P-51s, so Chet knew that he’d eventually be sent to England so gave his brother his phone number. In January 1945 his brother called. Chet recalled, “I’d been over there quite a while without leave, so I went to my commanding officer and said ‘I want to borrow a B-17. My brother is up at a replacement depot, and I want to see him.’ And so I did and spent a couple of days with him and it was a good way to visit.” While out doing reconnaissance, his brother’s plane was either shot down or the engine quit, and he landed just inside the French lines near the border, so was able to continue flying and he returned home safely from the war.

Chet was awarded a Bronze Star Medal for the quality of the work his unit did.

When Chet returned home, he joined the National Guard unit at the air base in Sioux City, Iowa and was the Engineering Officer for the unit which was a B-51 unit and eventually their air base had some of the first fighter jets, the F-80. He continued to serve his country until the start of the Korean War in 1951. He was poised to be promoted to Major, but with two young boys and his wife at home, the best choice for him and his family was to resign his commission from the National Guard. Chet was a District Engineer for Frigidaire Corporation and then worked for the Wilson Trailer Company making livestock trailers. After obtaining his Doctorate in Engineering, his final employment was teaching at Oklahoma University.

His love of aircraft and engineering remained with him his entire life. He lovingly restored antique airplanes and authored eight books on aviation history. In 2007 he was inducted into the Vintage Aircraft Association Hall of Fame.

After his wife passed in 2016, Chet moved to Colorado live near one of his sons, and currently resides at Elk Run in Evergreen, which is where we had the pleasure to meet Chet when he was receiving home health care nursing and therapy. Julie Nelson, RN says “Chet makes my heart smile. His wealth of knowledge from history and his lifetime makes him an absolute delight to talk to.”

“By participating in the We Honor Veterans Program, Mount Evans has access to training that helps staff and volunteers understand more about the circumstances and experiences veterans may have found themselves in. Many of those associated with Mount Evans also have family/friends who have or are serving, so recognizing patients who are veterans holds a special place in our hearts as well,” explains Mary Noonan, Social Worker and lead for Mount Evans’ We Honor Veterans program. 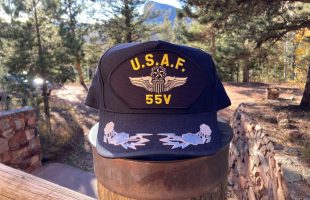 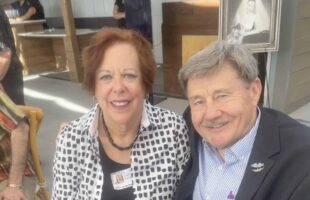